well done for rescuing it

good lad!!!
looks a good starting point for another belter of a build.
keep it coming andi

I dont mind project cars but I HATE SANDING!!!

yeah colour is nice, it's a bit of a secret colour i think. i thought the car was green in the ad!

yeah it's better nick than the last one i had, when i got it! i shall do!

My initial (short term) plan is to get the Roc on the road with the 1.6 in it but make the handling impeccable, stiff, tight, no weird noises, good brakes etc. This is mainly to get an MOT out of the way. Plus I can see what a really light Rocco feels like.

Started with the back end.. This car didn't have anti roll bars! I was amazed to find that out, I thought they all had them. The GT must be the basic spec?? Anyway I set about installing the OK parts I have from my crashed red Herman. I dropped the rear beam to fit rear beam poly bushes, and a KW 26mm anti roll bar, which needed some holes drilling for fitment. Such a good design in the fitment department. 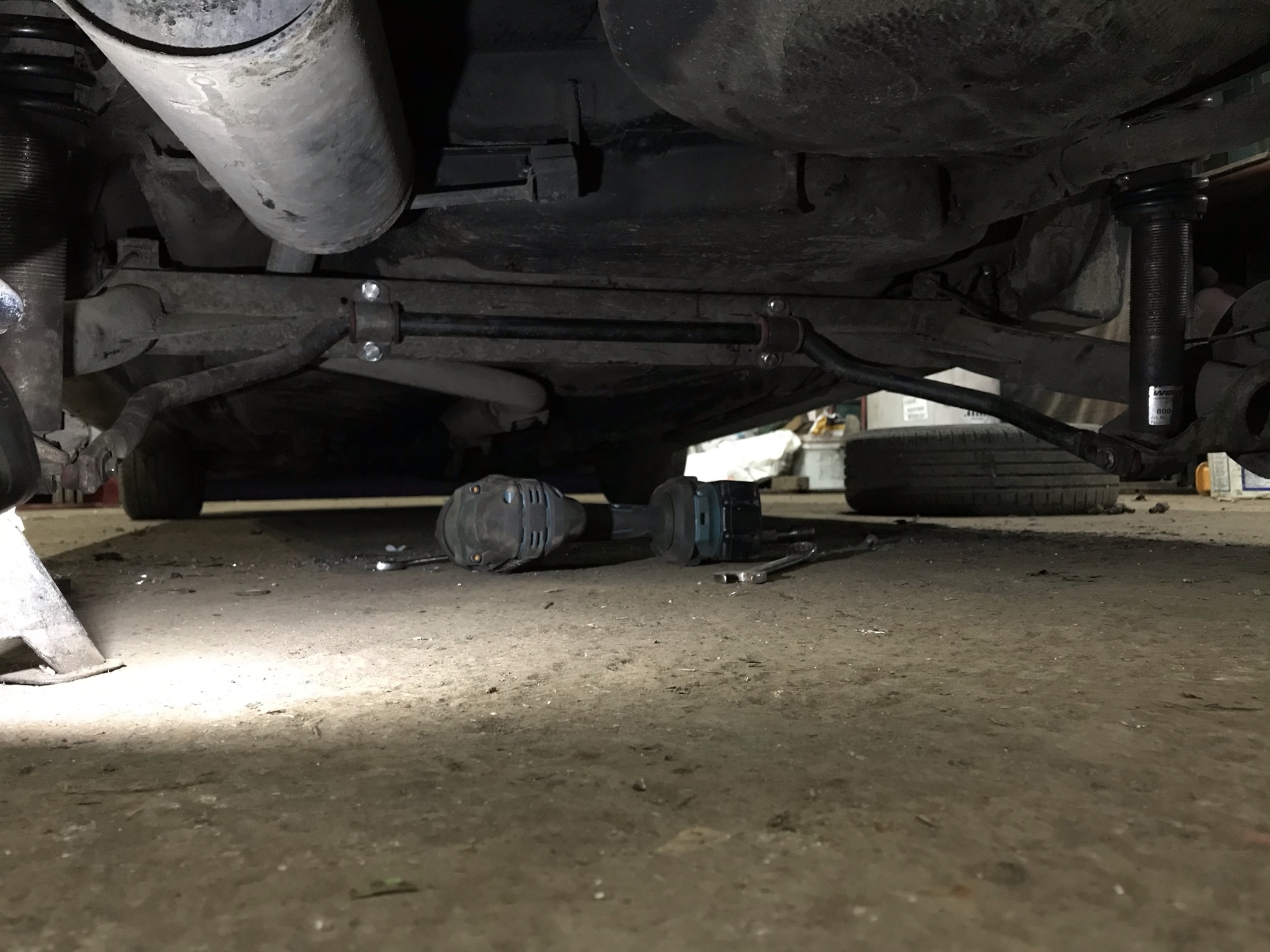 Off with this crusty suspension. I've got the receipt for this, the set cost £140 new! 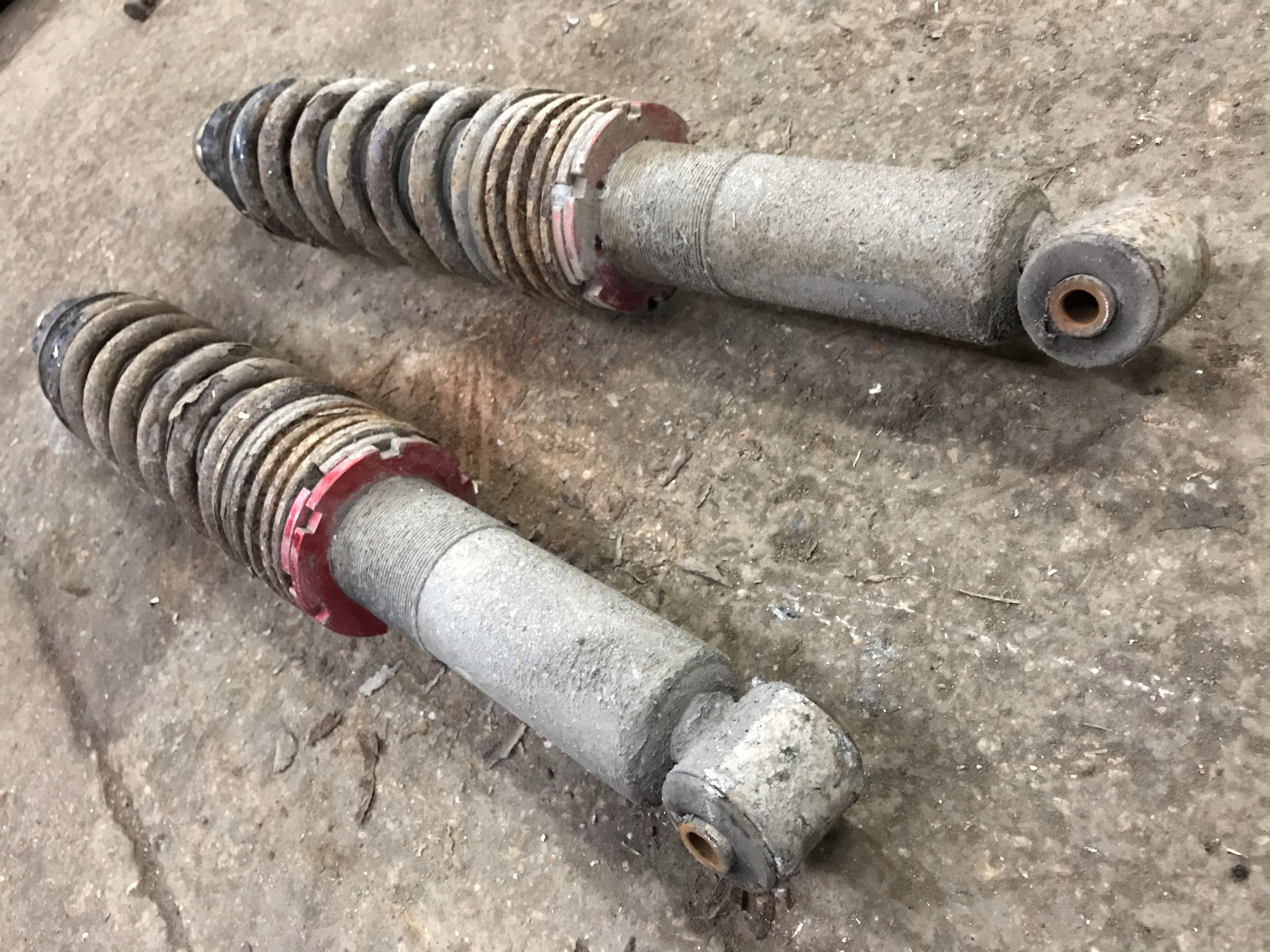 On with Weitec GT coilovers with 325lb springs. 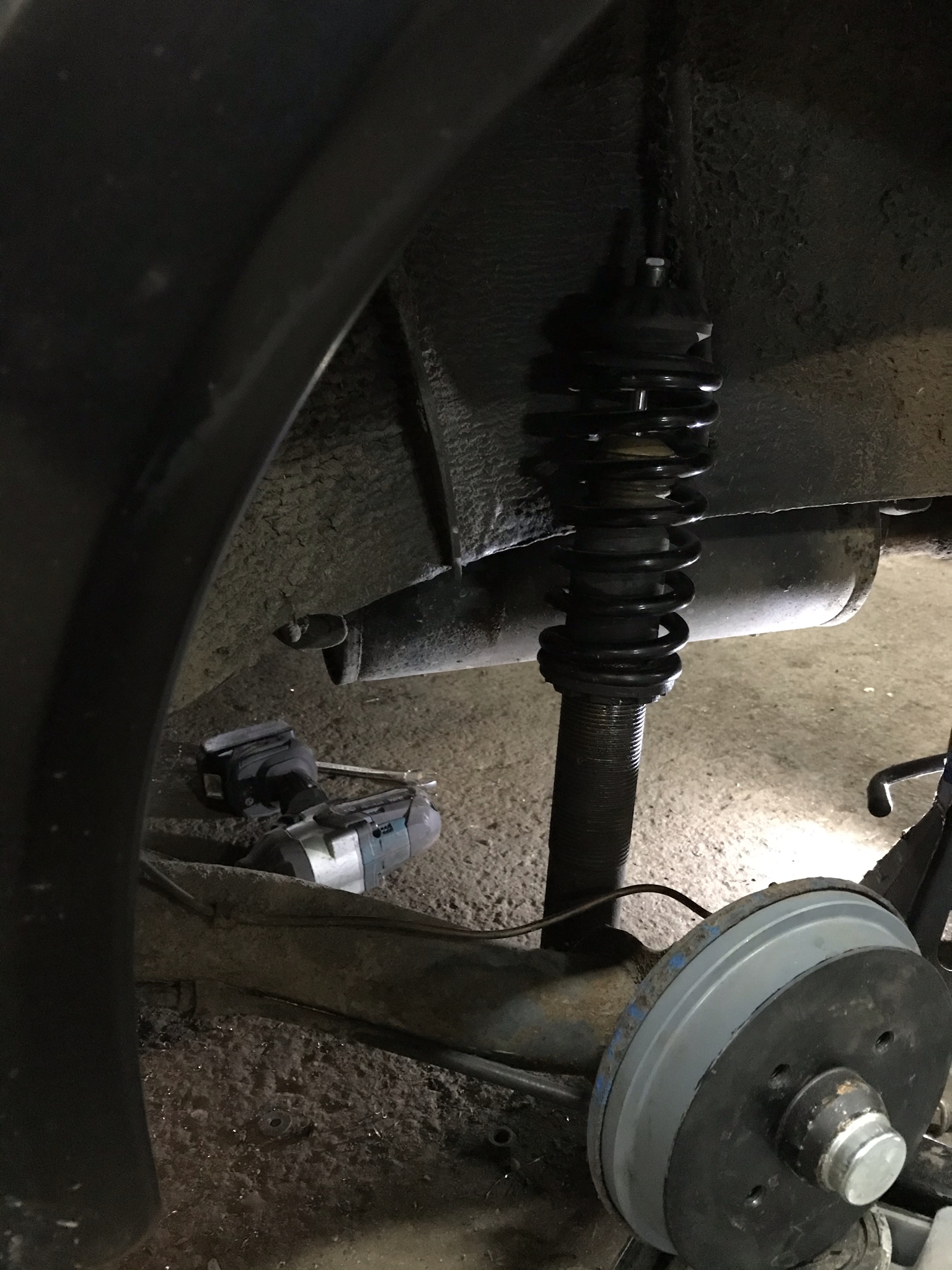 One of my old rear 15mm stub axle spacers/drop plates had been bent slightly from the crash so I decided to make a new set and try and shave some of the weight off to reduce the unsprung weight of the rear axle.

We had some 16mm bright bar lying around at work so I used it for my new plates. I cut it out with a 9" angle grinder. To get the holes in the right place I welded an old stub axle to the plate and drilled a center mark with a 10.5mm bit. This meant I could drill the pilot holes absolutely central. I repeated for the other mounting position and then drilled some holes to reduce the mass. Much drilling/tapping/countersinking later.. 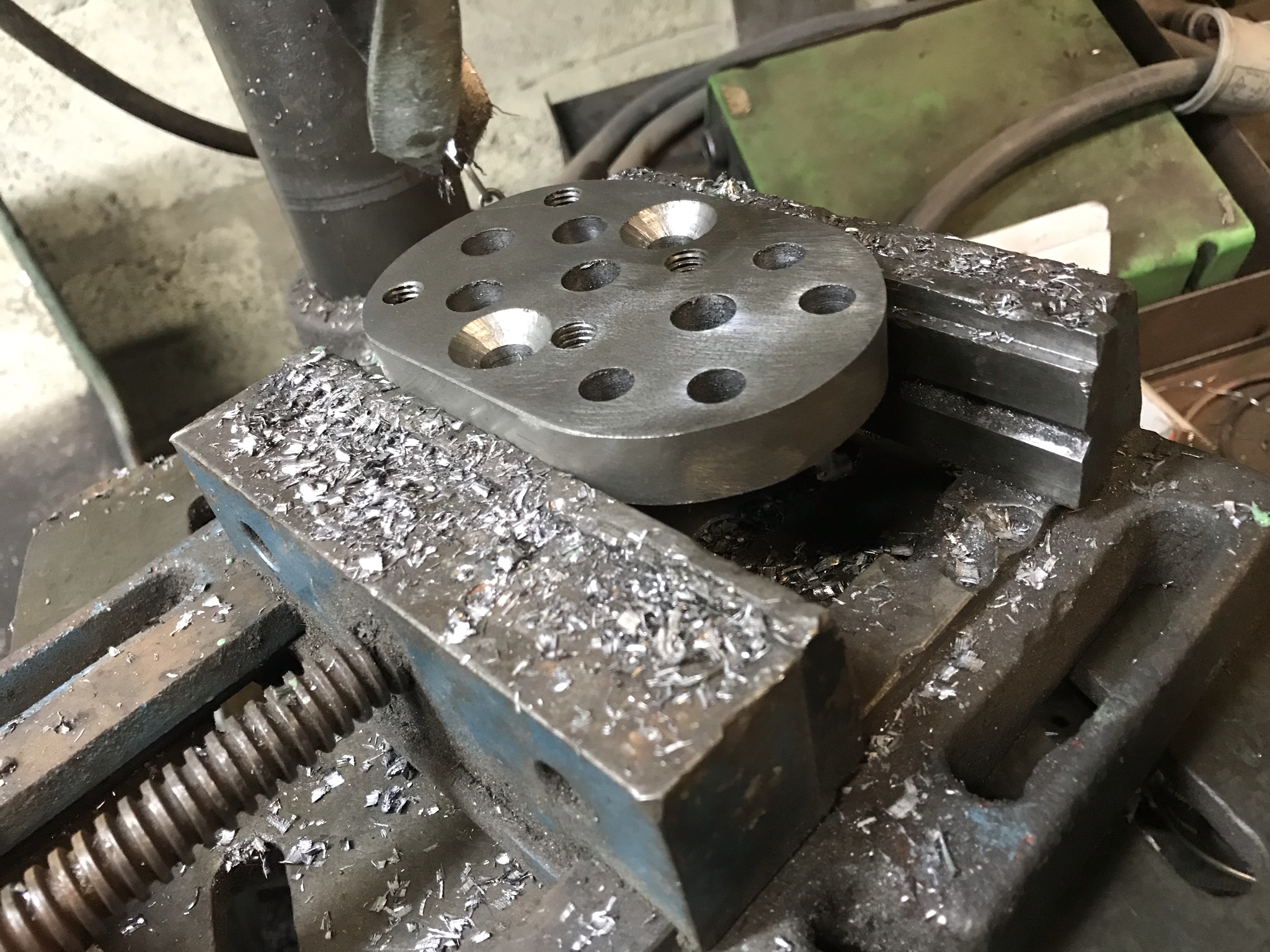 I had to sharpen a massive drill bit for the countersinking. Need a proper c/s set!

So! My old drop plates tipped the scales at.. 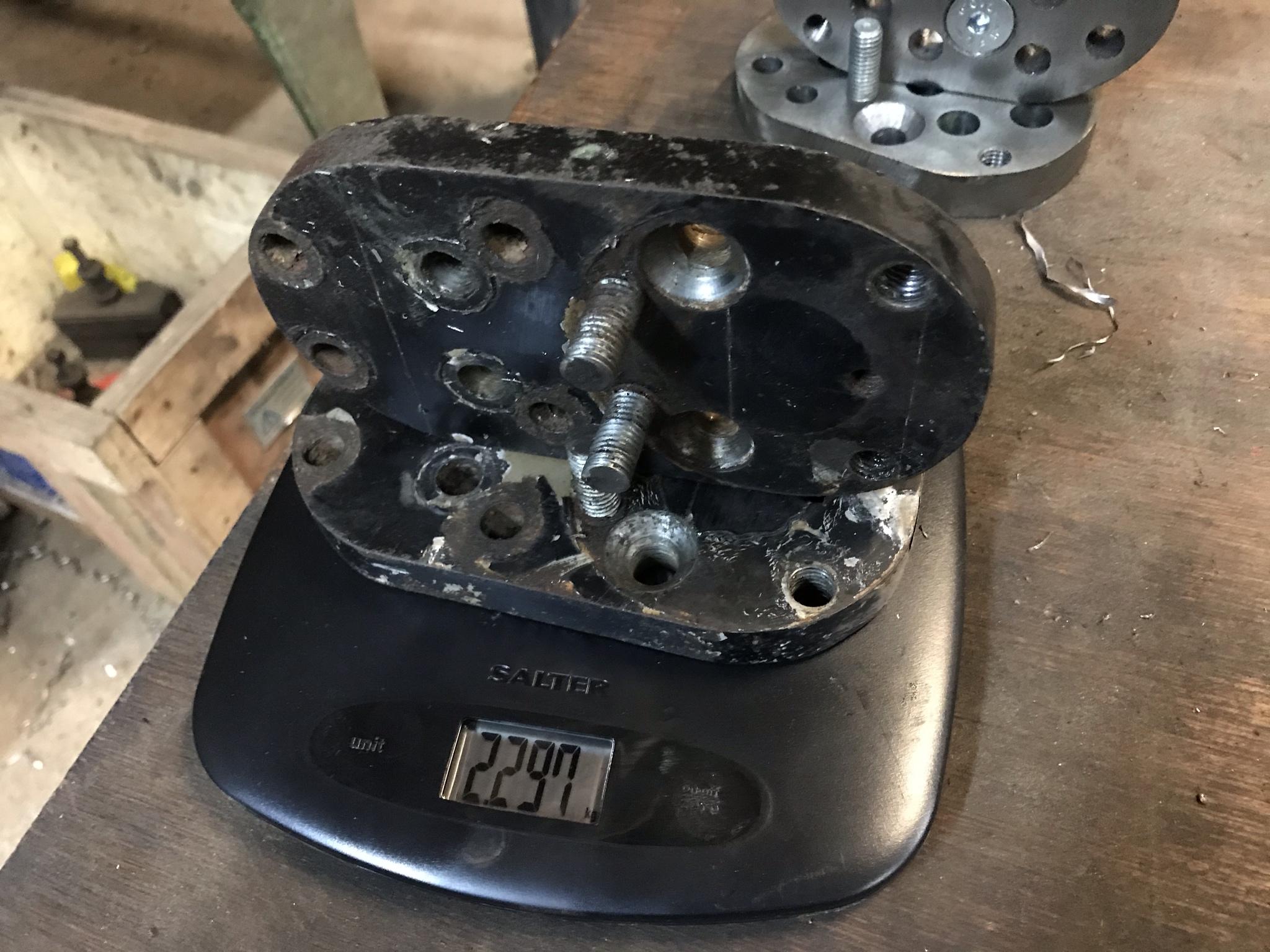 And the treefingers drop plates version 2.0 tip the scales at... [drumroll] 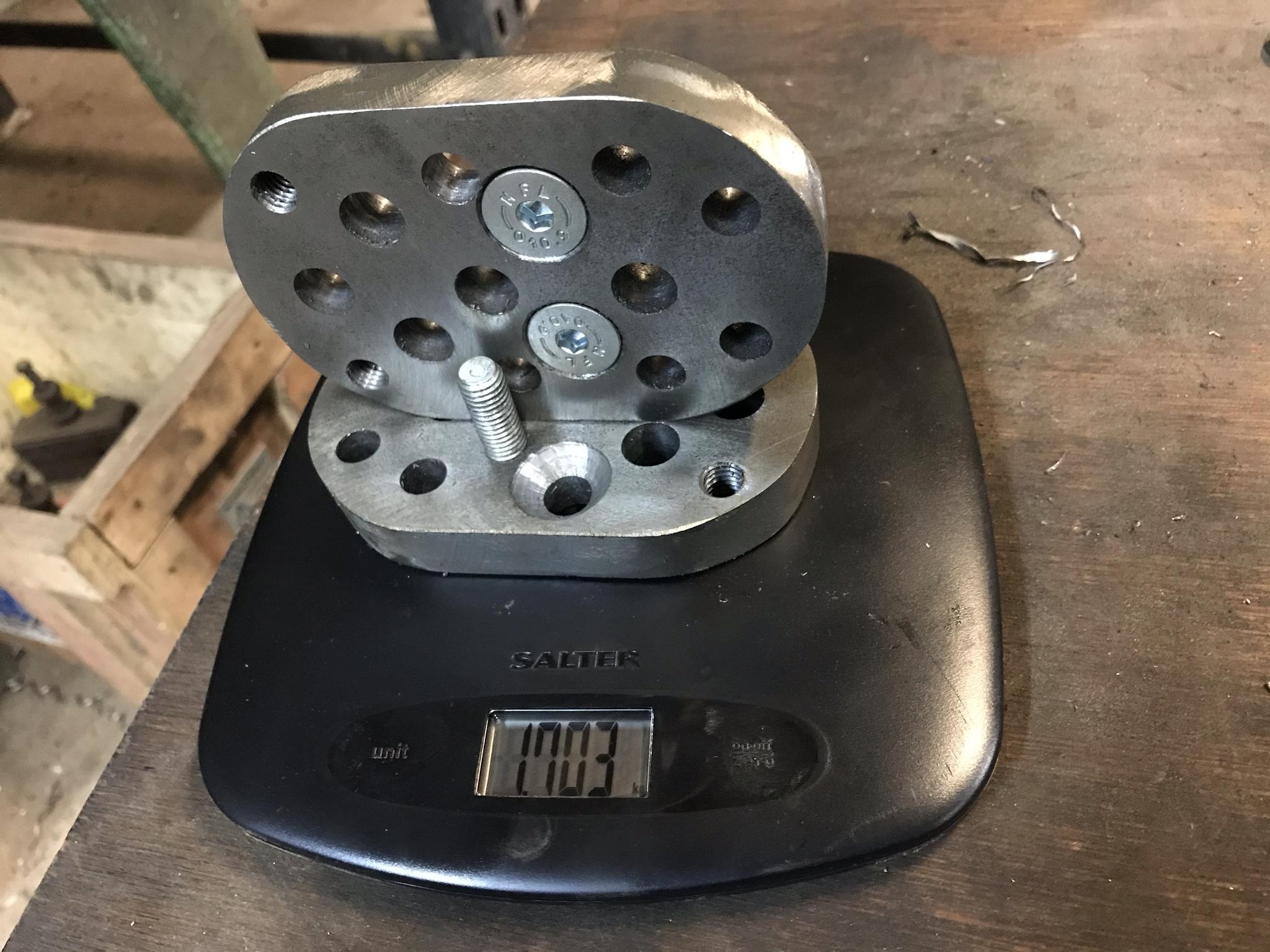 Fitted with 10.9 bolts and threadlock everywhere 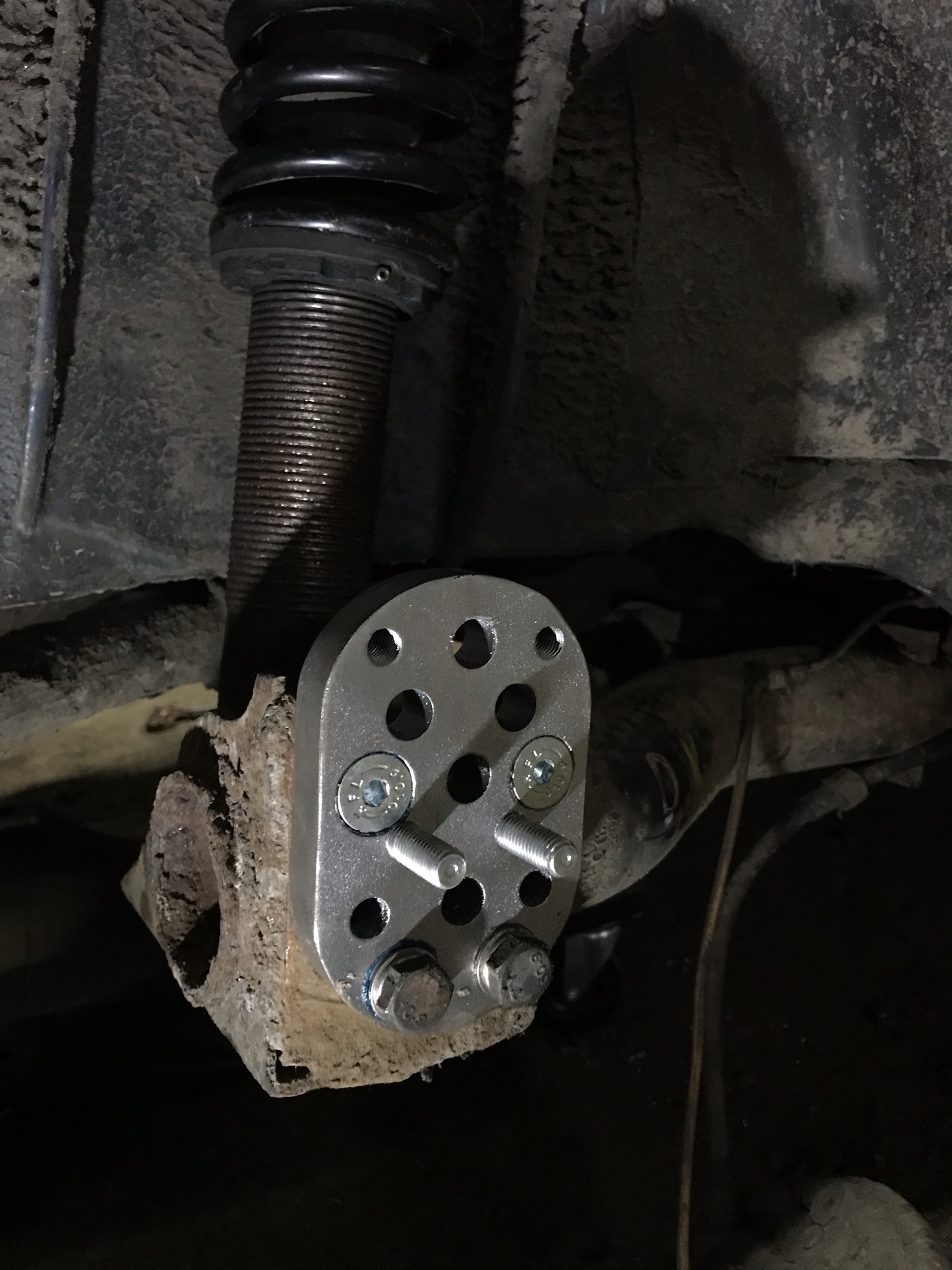 This photo shows the spacing of the rear wheels. I think Roccos look a lot better with the fronts and rears properly proportioned to the arches. 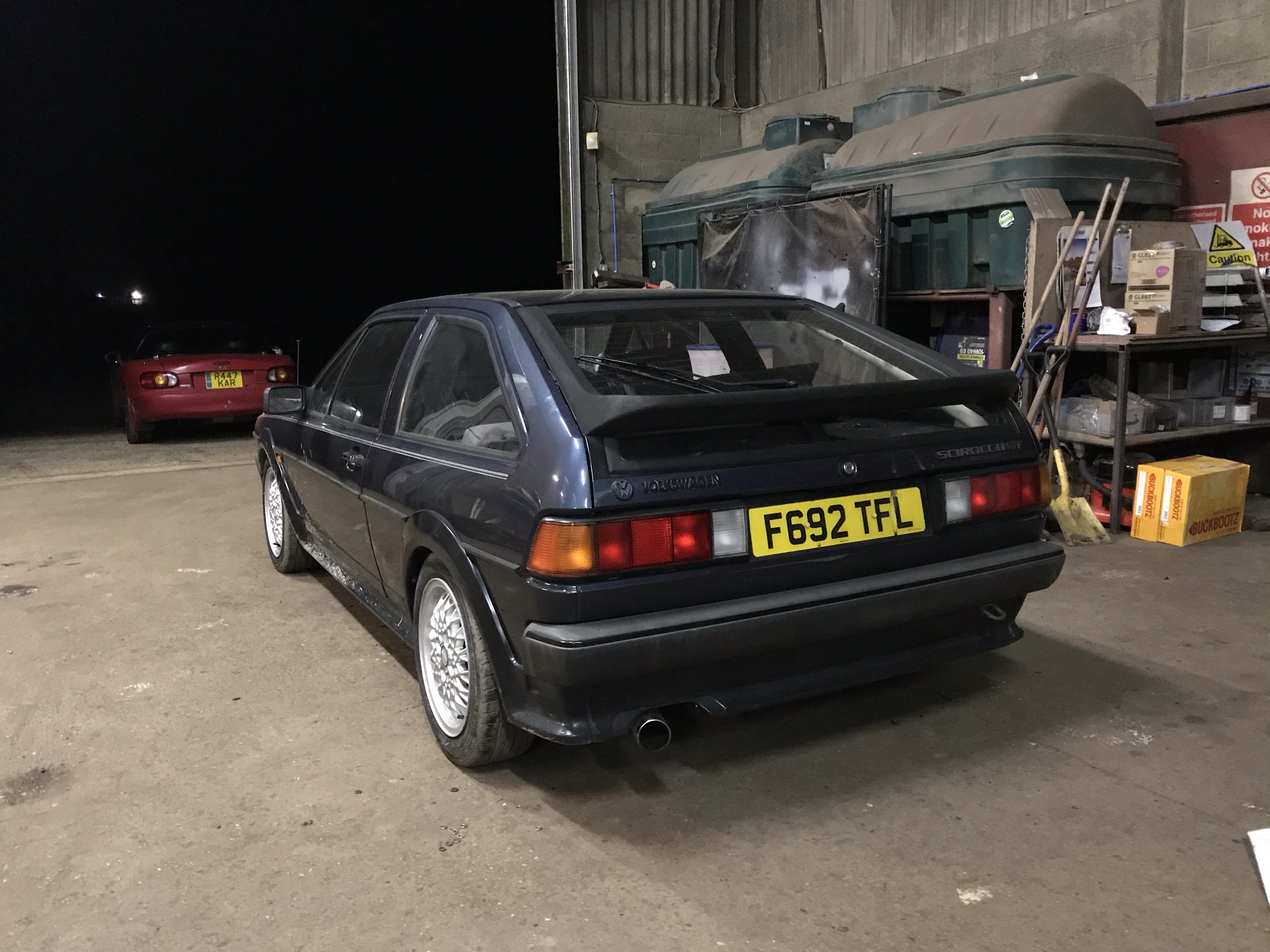 Steering rack was sloptastic so that was the next job one evening later. Fueled by microwaved sweet potato and hobnobs (not microwaved) I set to it. The job was going very well until I actually had to get the clamp brackets off and found out someone had put a 4 branch mani in the way, how nice of them! Much wriggling and thinking later, I ended up removing the front and rear engine mounts to twist the lump and withdraw the beastie! 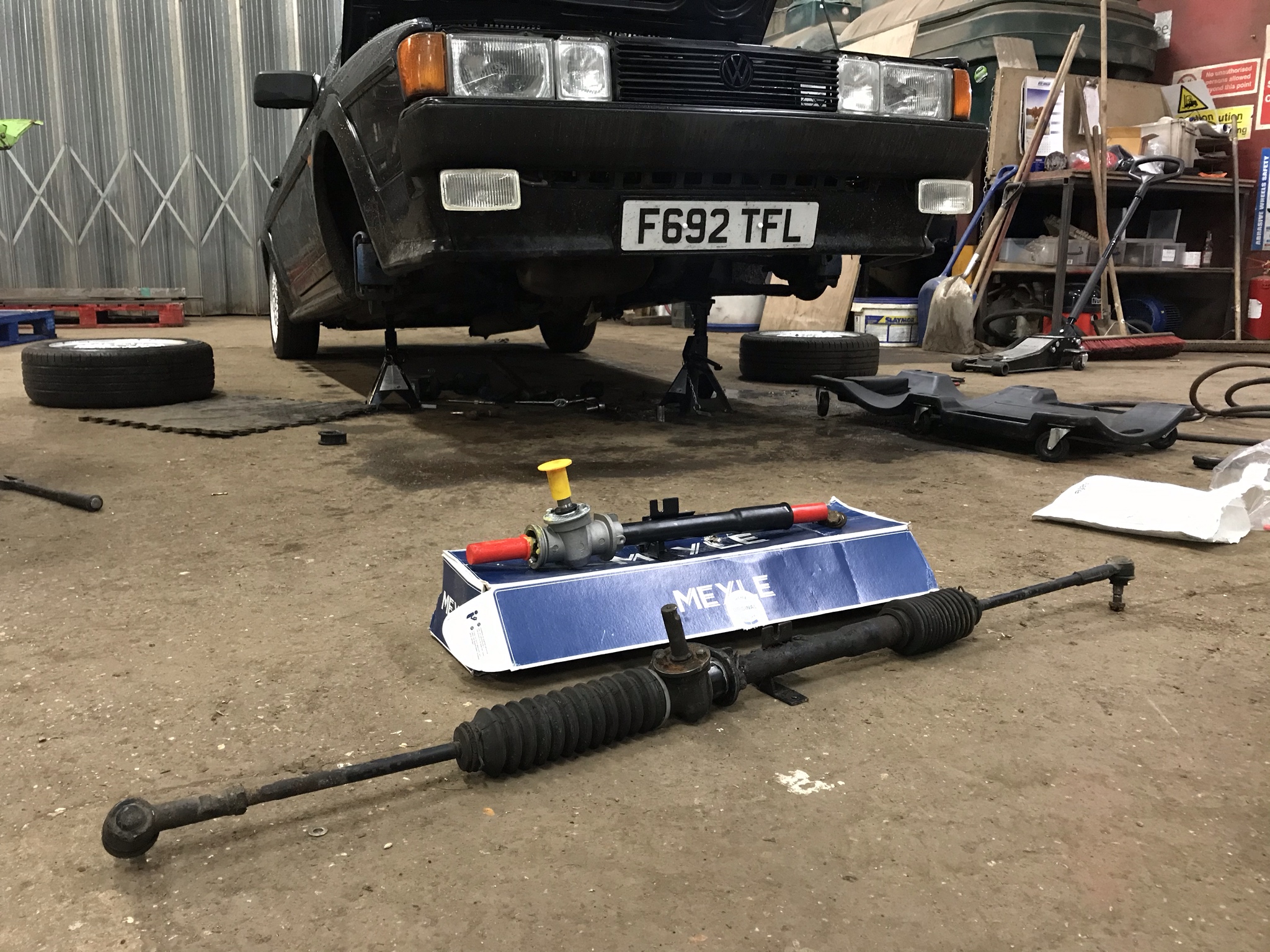 Cause of failure.. bad boots, crap ingress, and a failed pinion gear 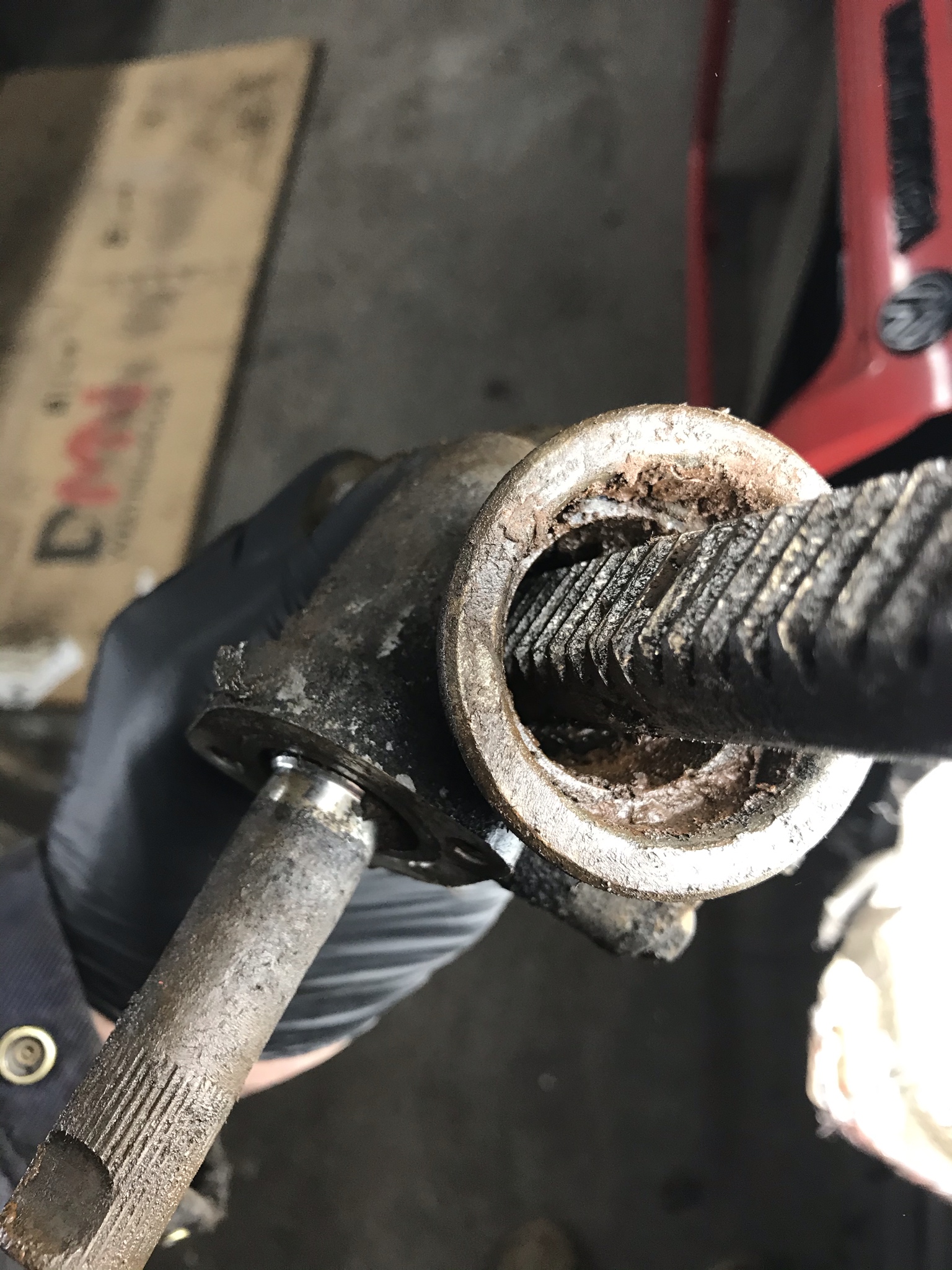 New bushes to go in! Needs new boots too! In the post, they are. 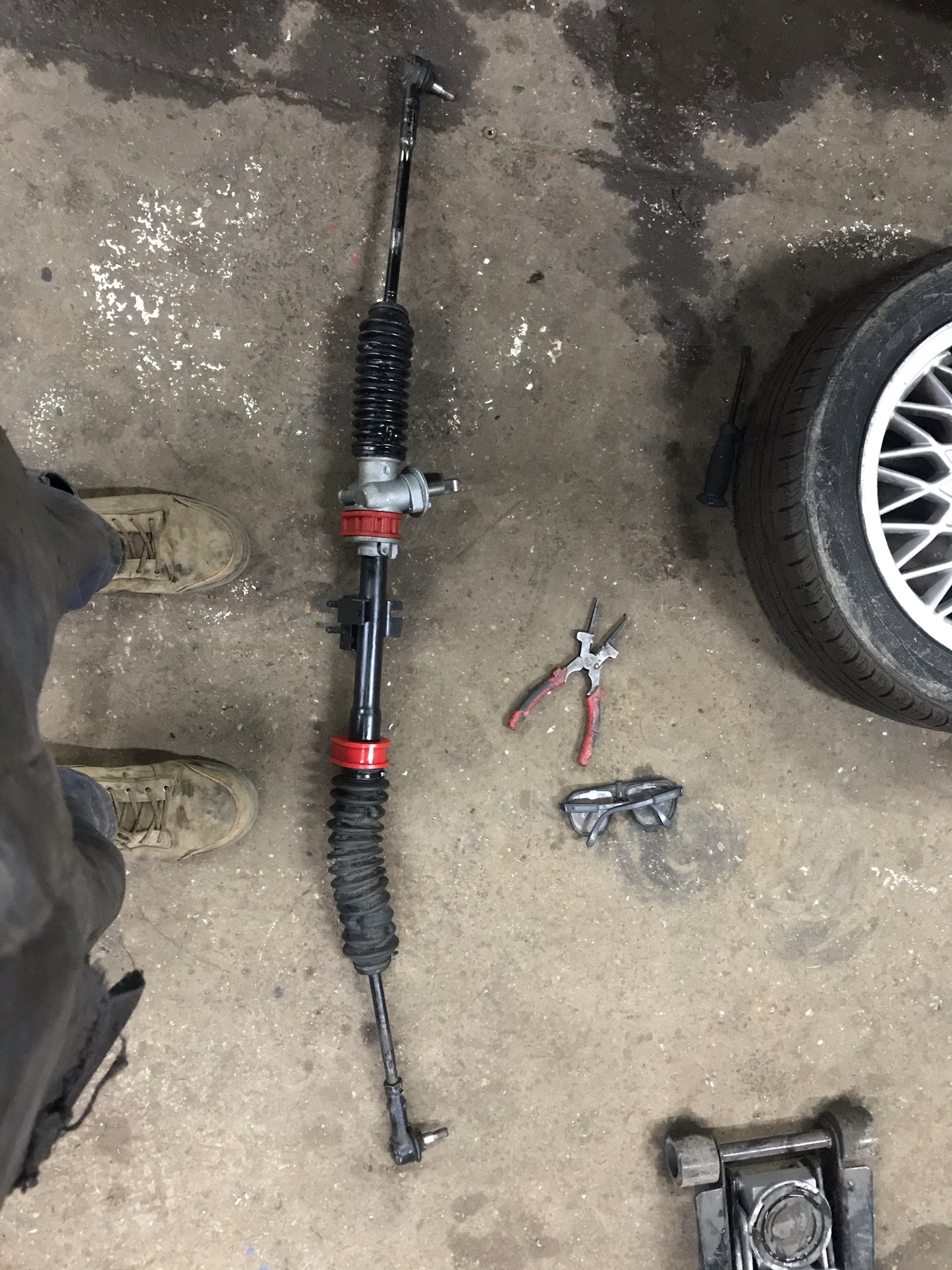 Rack in! The steering is great now, when you move the steering wheel the wheels also turn! A plus! And it would have been plain rude not to polybush the rear engine mount when it went back on. So I did. 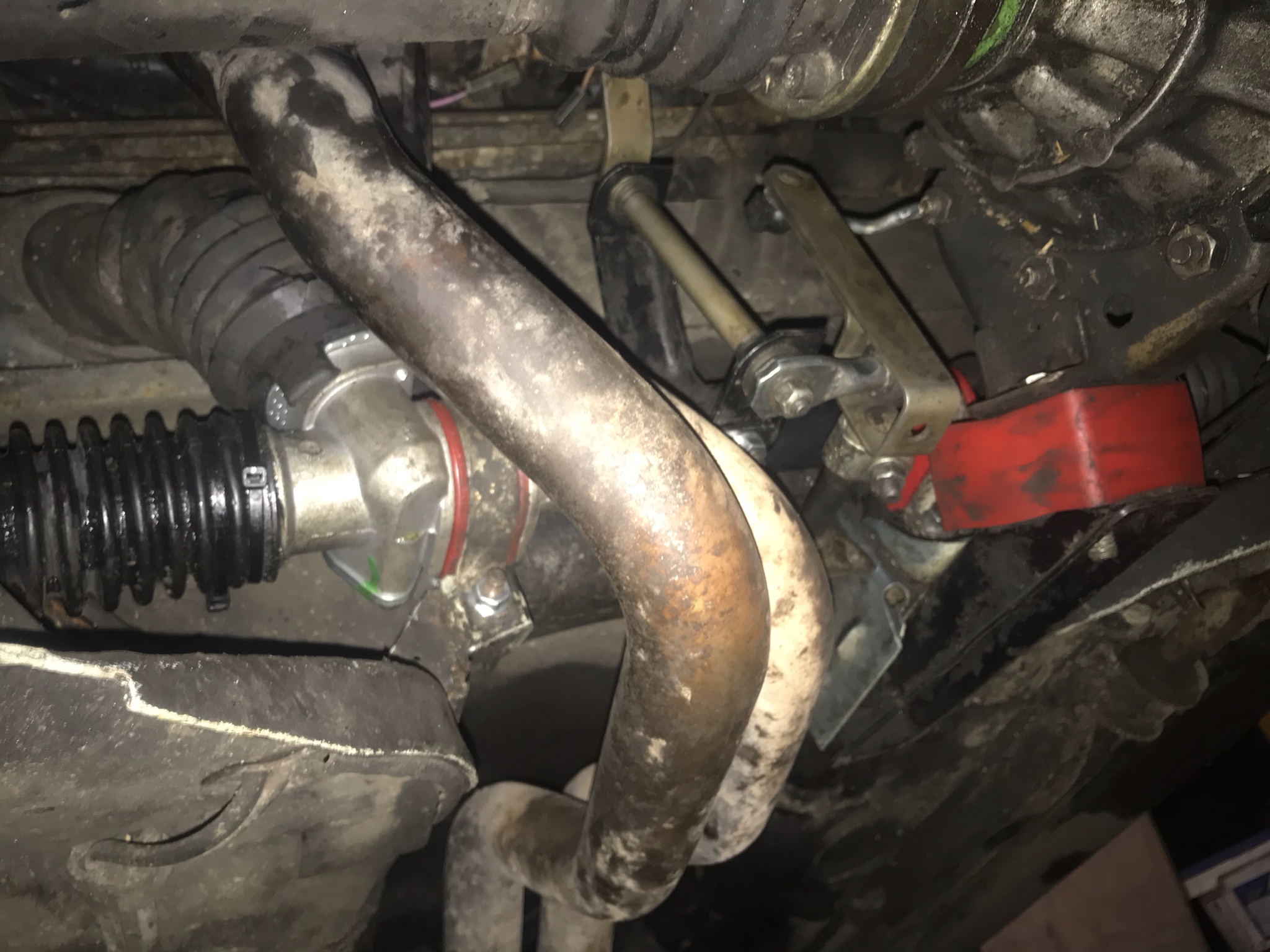 I need a name for this car..

Klopp........ he seems to have dragged Liverpool by the scruff of the neck and into success.

Keep going with the build matey and lift that trophy...

Good to see you back on the project trail Andy.

After your previous masterpiece I’m looking forward to this one!

Just picked up on the anti roll bar point; you’re correct the 1.5 and 1.6 carbed cars didn’t come with rear ones generally.

After your previous masterpiece I’m looking forward to this one!

Thanks Sean me too.

Yeah this didn't have a front either..

The car came with a steel jetex exhaust, and it was rattling around a bit. 40 minutes of struggling to get it apart to re align it resulted in me hacksawing it off. Someone had done the clamps up so bloody tight the tube was notched into each other at the clampings. Friggin old rusty seized crap! Old one off.. 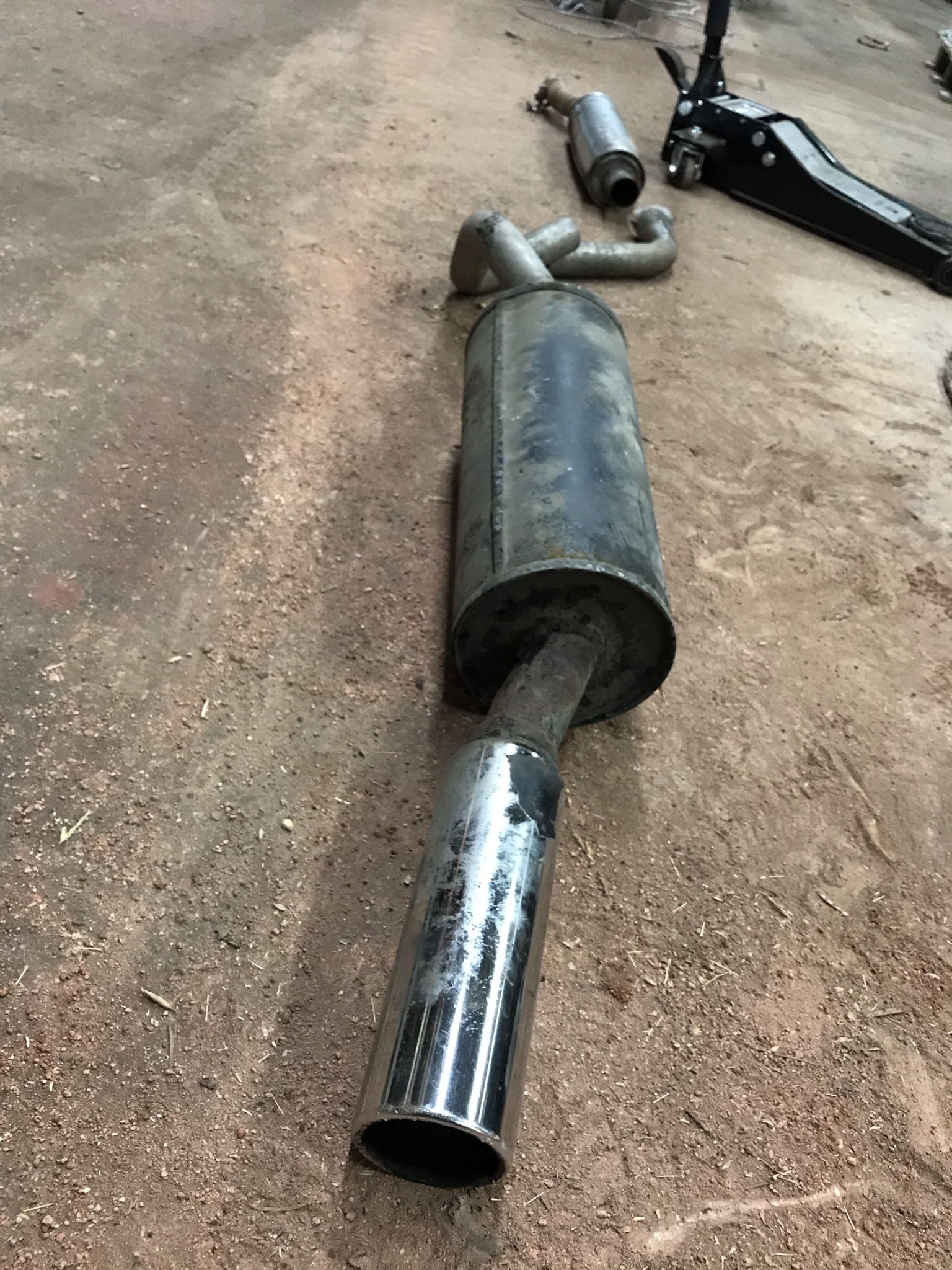 I decided to throw on the 2.5" system i had previously made, and make a joining section to the stainless 4 branch, making a nice temporary full stainless system. I used the stainless mig and splatted something together from various bits of pipes that were lying around. 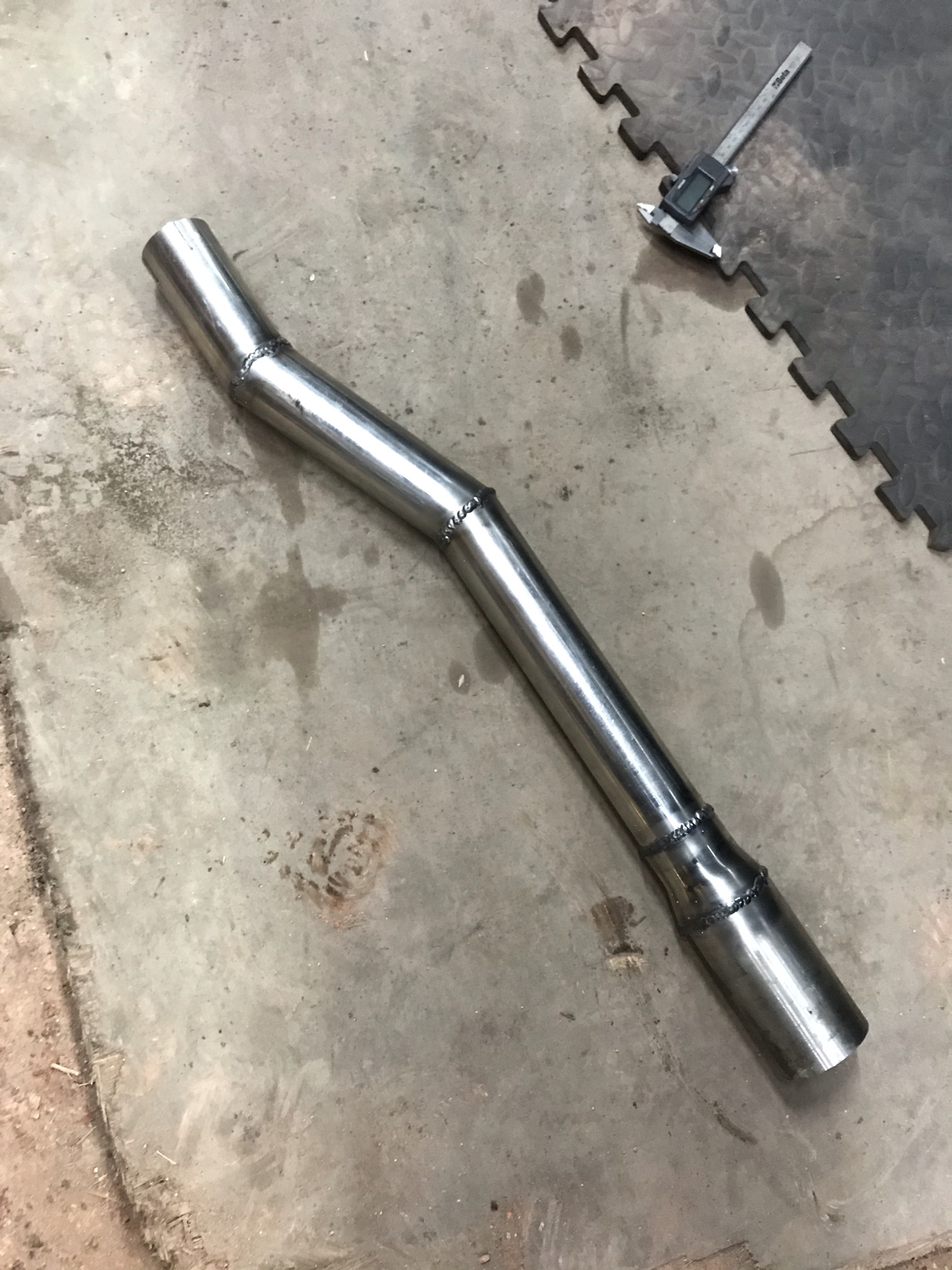 Made a nice little clamping end by drilling holes and cutting slots.. 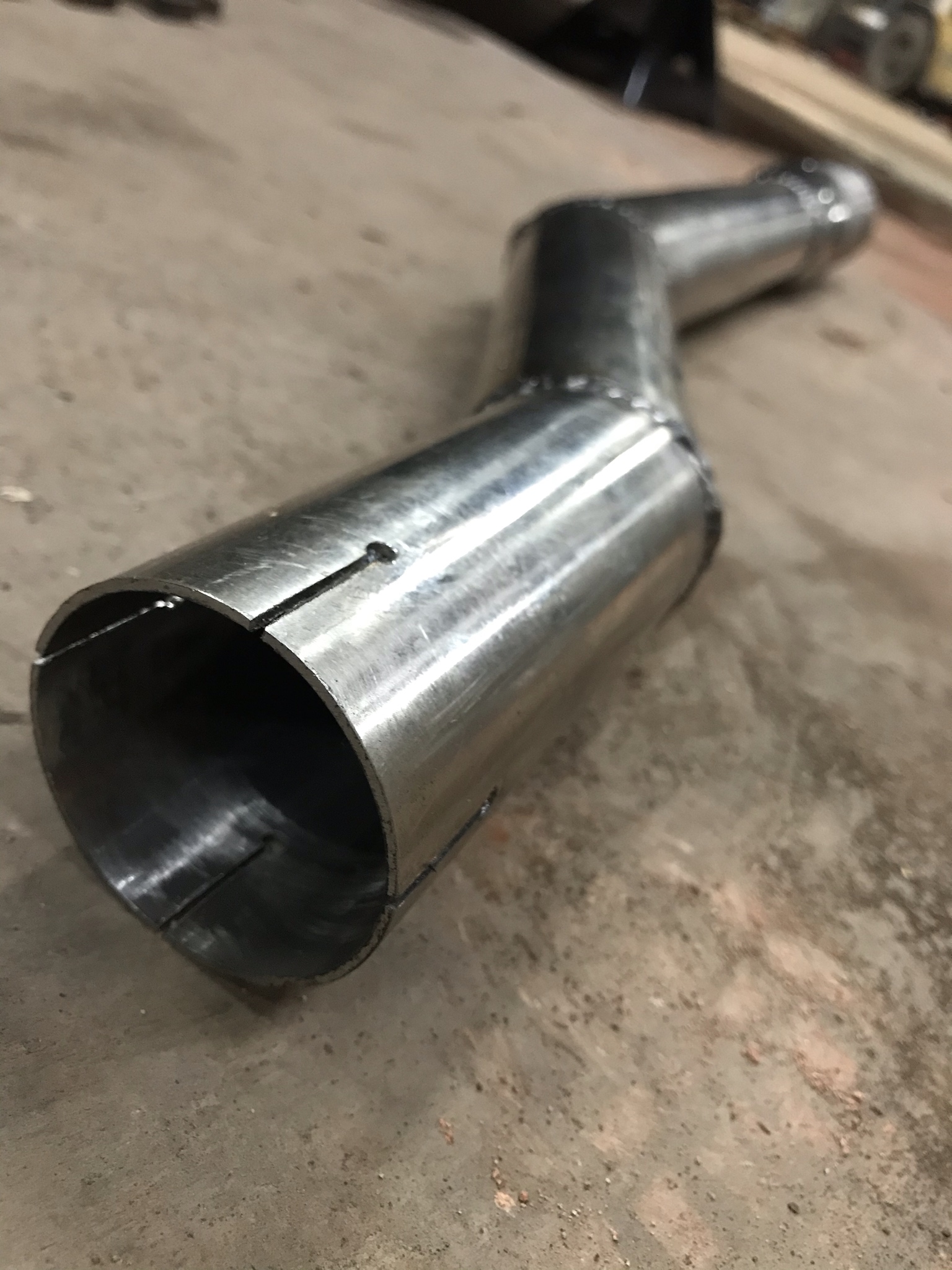 Two backboxes to test out and see which sounds better.. the Heinz bean can or the two week holiday suitcase.. 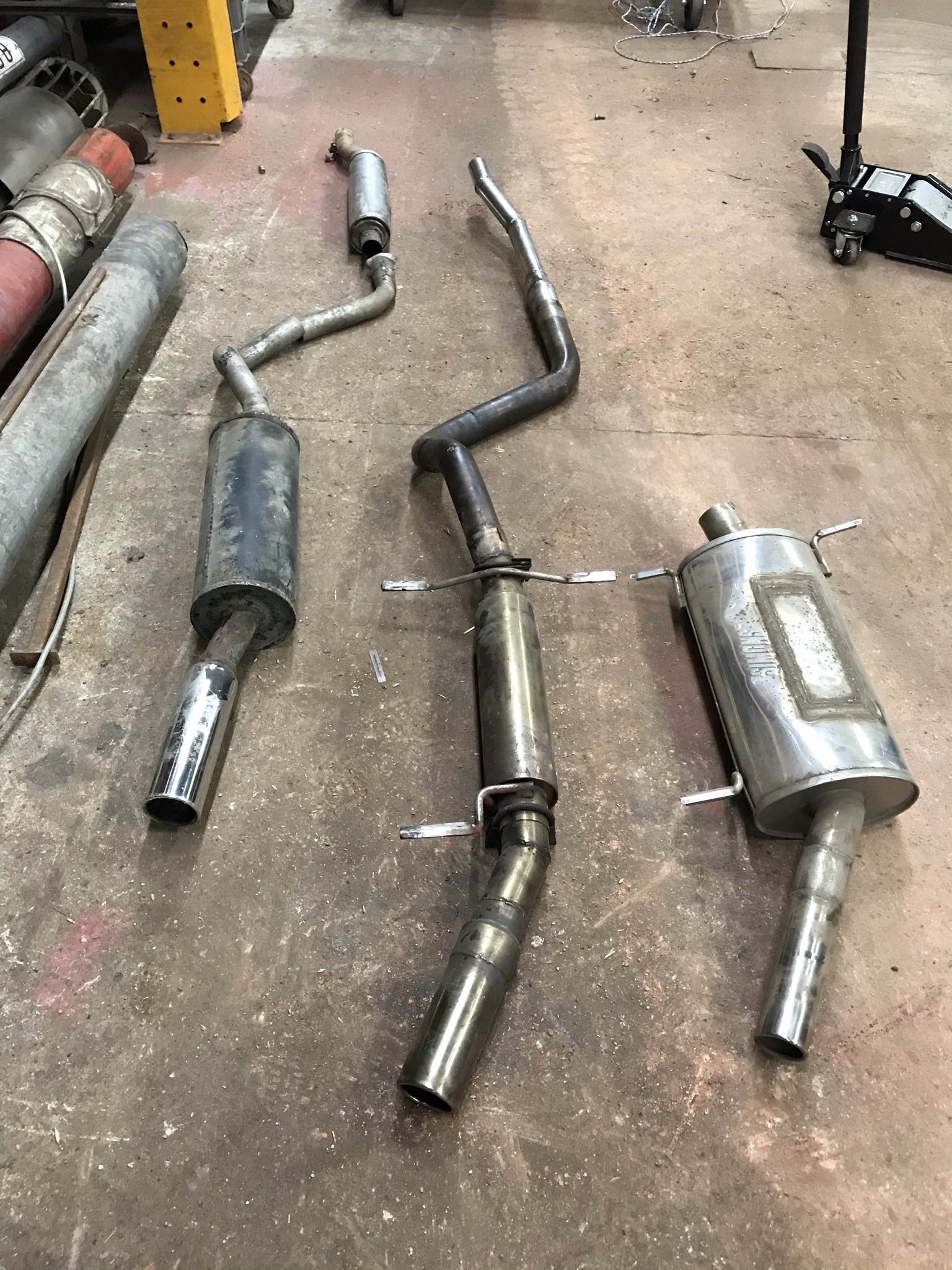 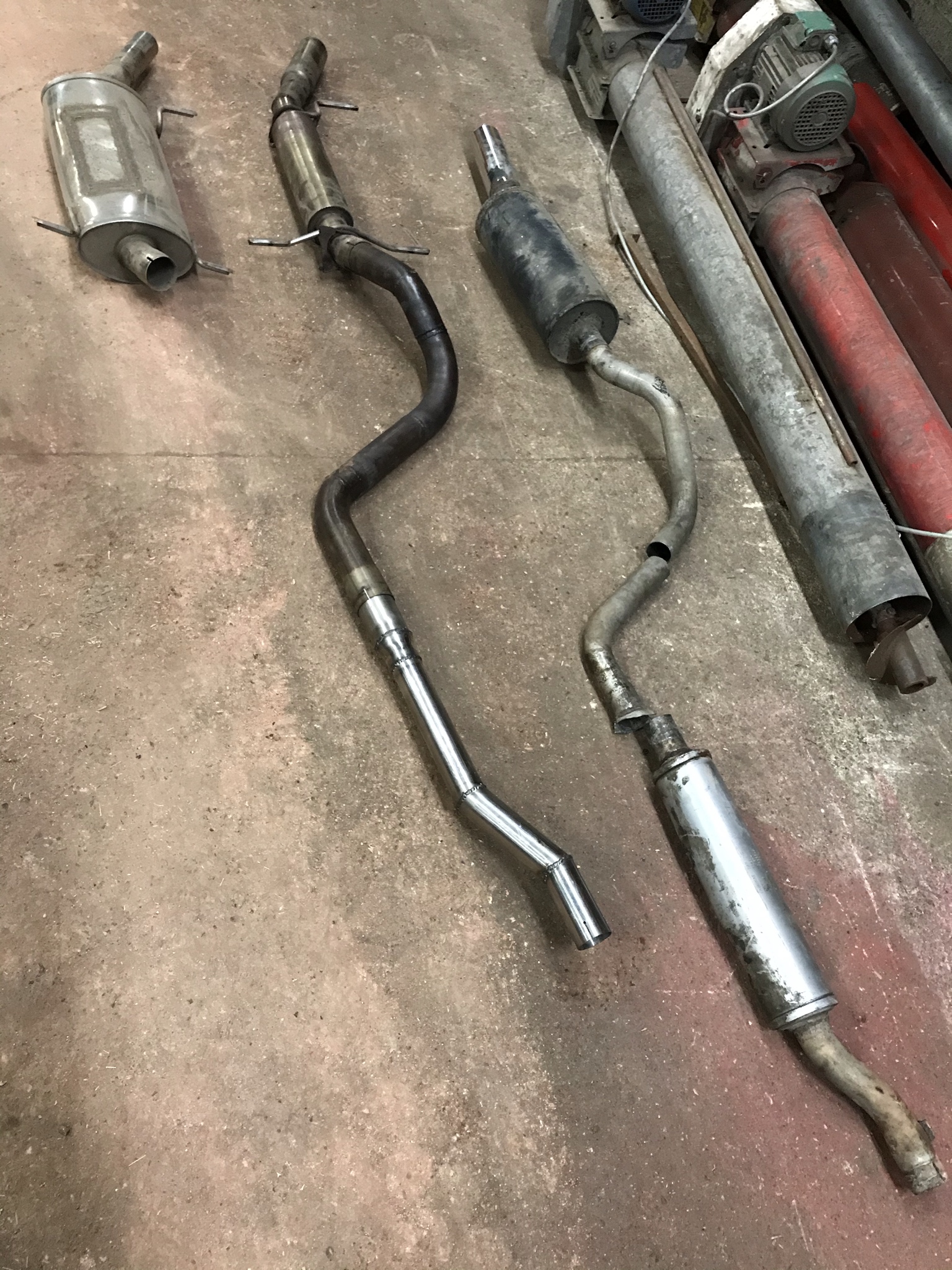 All fitted. Large backbox sounds better but it has no sound deadening in it so I need to cut it open and put some back in (was using it to experiment with exhaust tones). Just to muffle the high frequencies, it's a bit raspy. 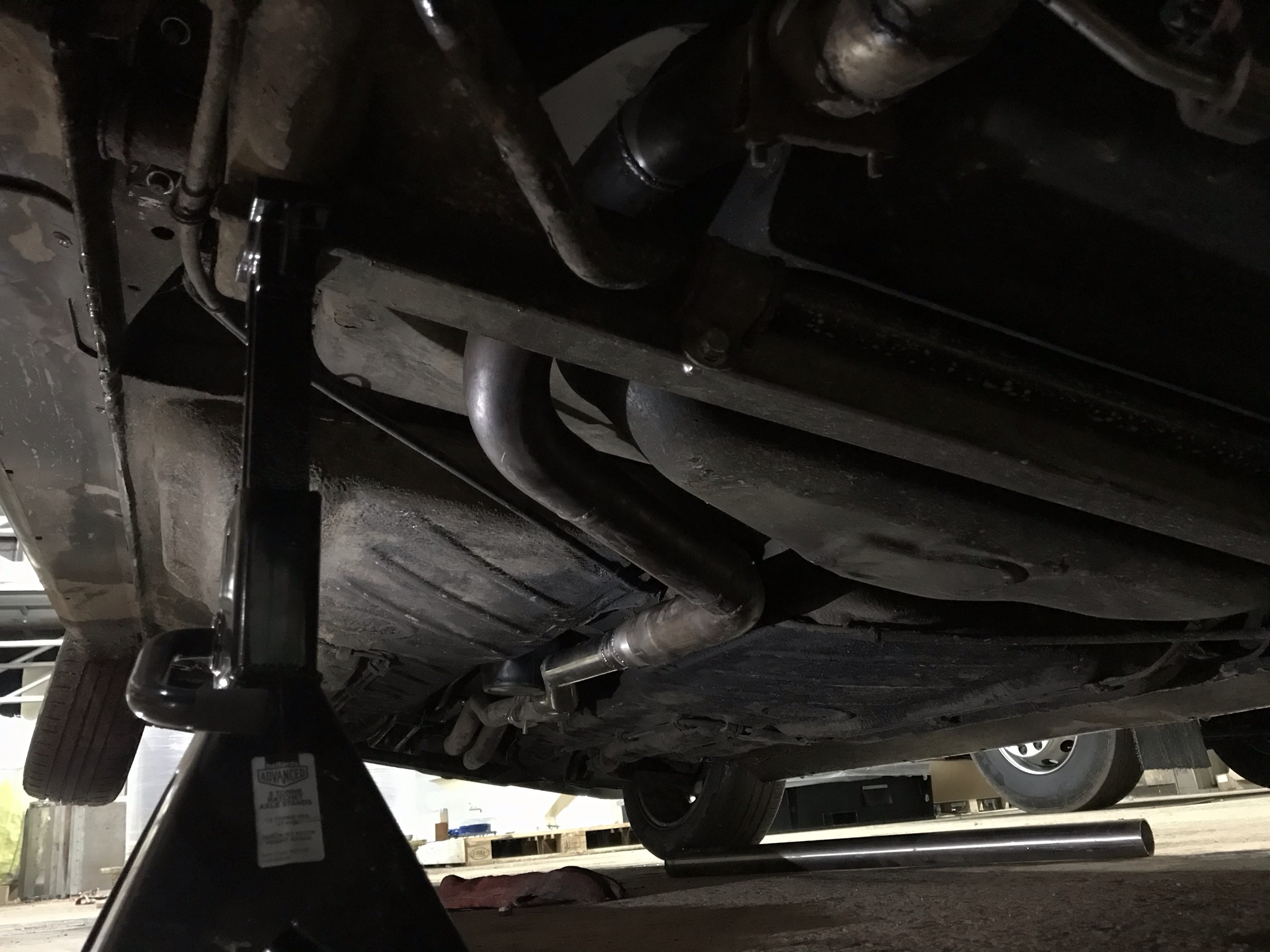 Through the chaos of storms, downed trees and a lot of aquaplaning, I visited the one and only Mr Knox this week. Picked up some front brakes, mk3 Golf GTI 8v calipers for 280mm discs, with adapter brackets and braided hoses (or breaded as my mate says). Side-by-side comparison with what I had fitted before on 280mm discs, Vauxhall Astra 16v GTE calipers.. 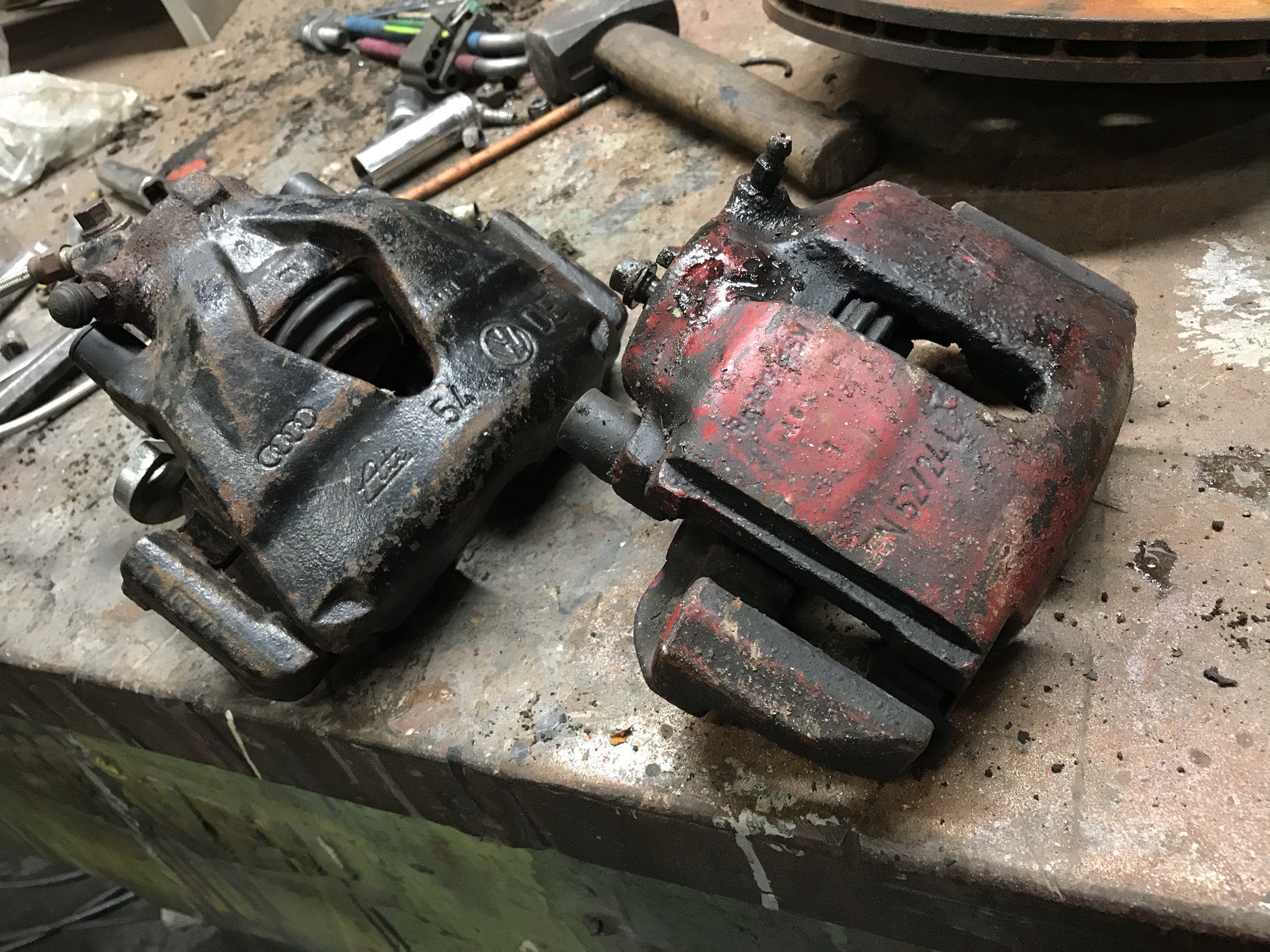 The MK3 ones look as if they may have a greater stroke distance of the piston? The MK3 piston diameter is 52mm against 50mm for the GTE piston. 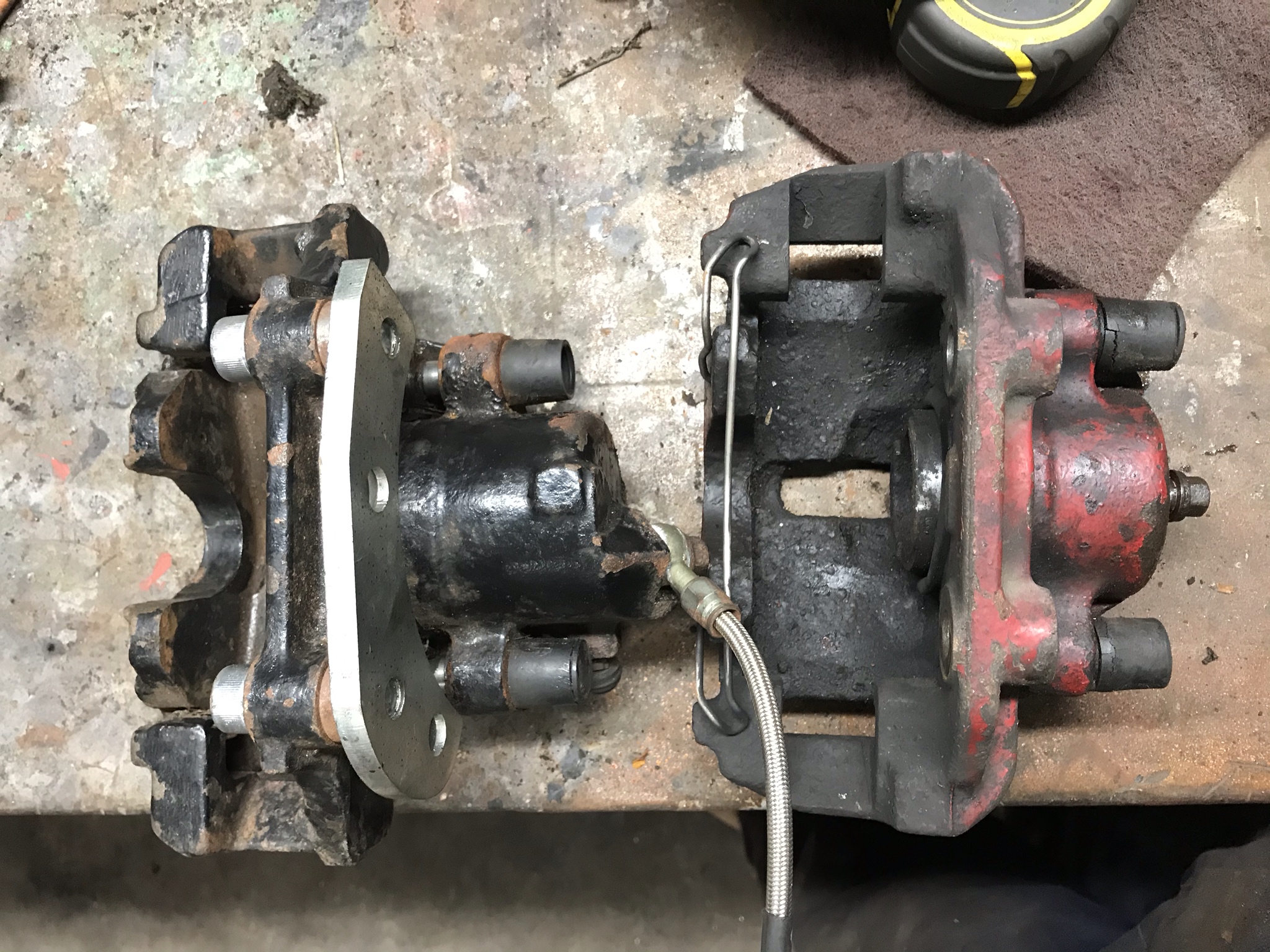 What is very very nice is the increased surface area of the MK3 brake pads. I look forward to throwing a track day at these. 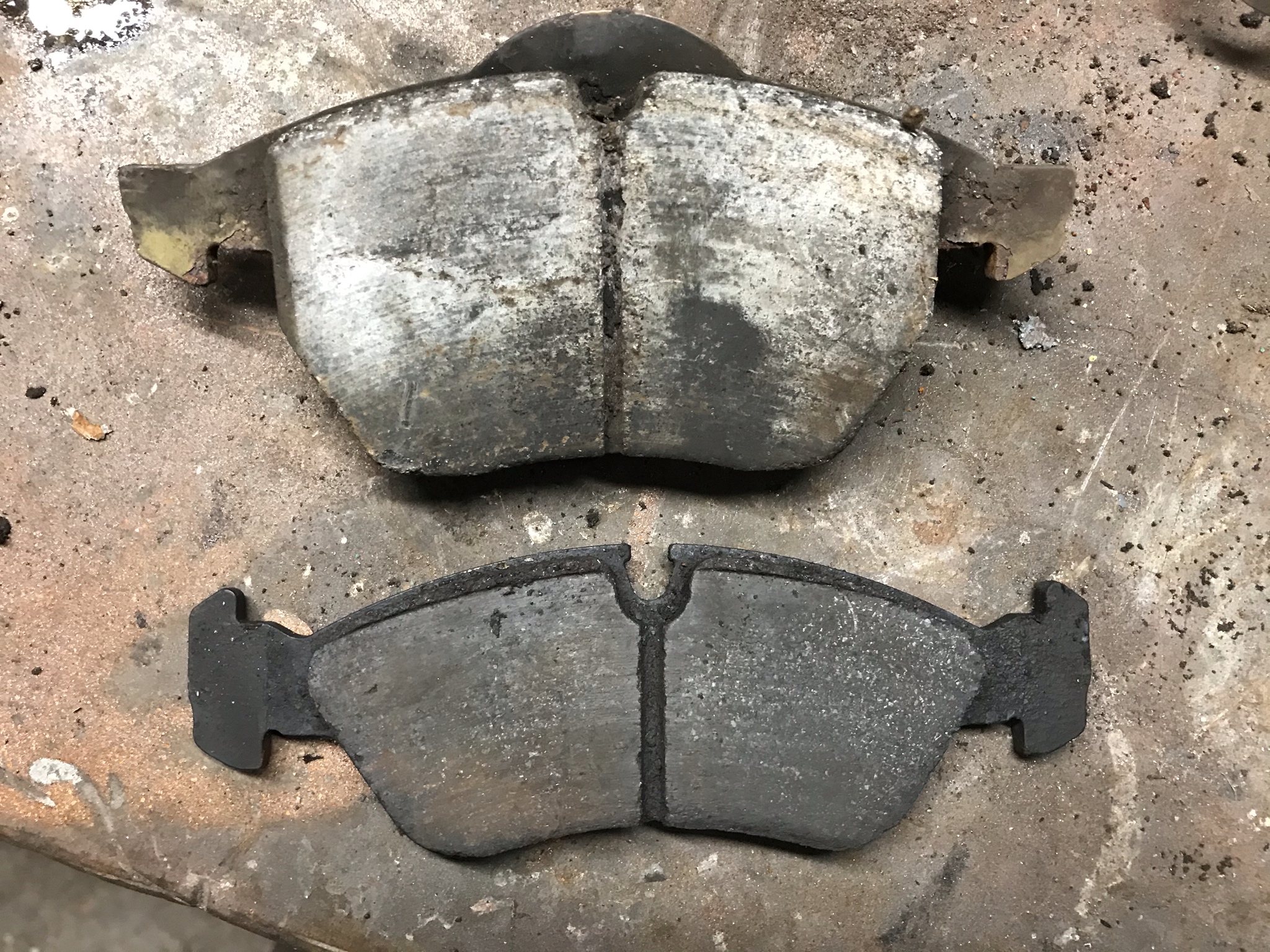 Tonight I also rescued some poly bushes from my old wishbones. These will go into brand new febi 'bones, their third installation. Still going strong! 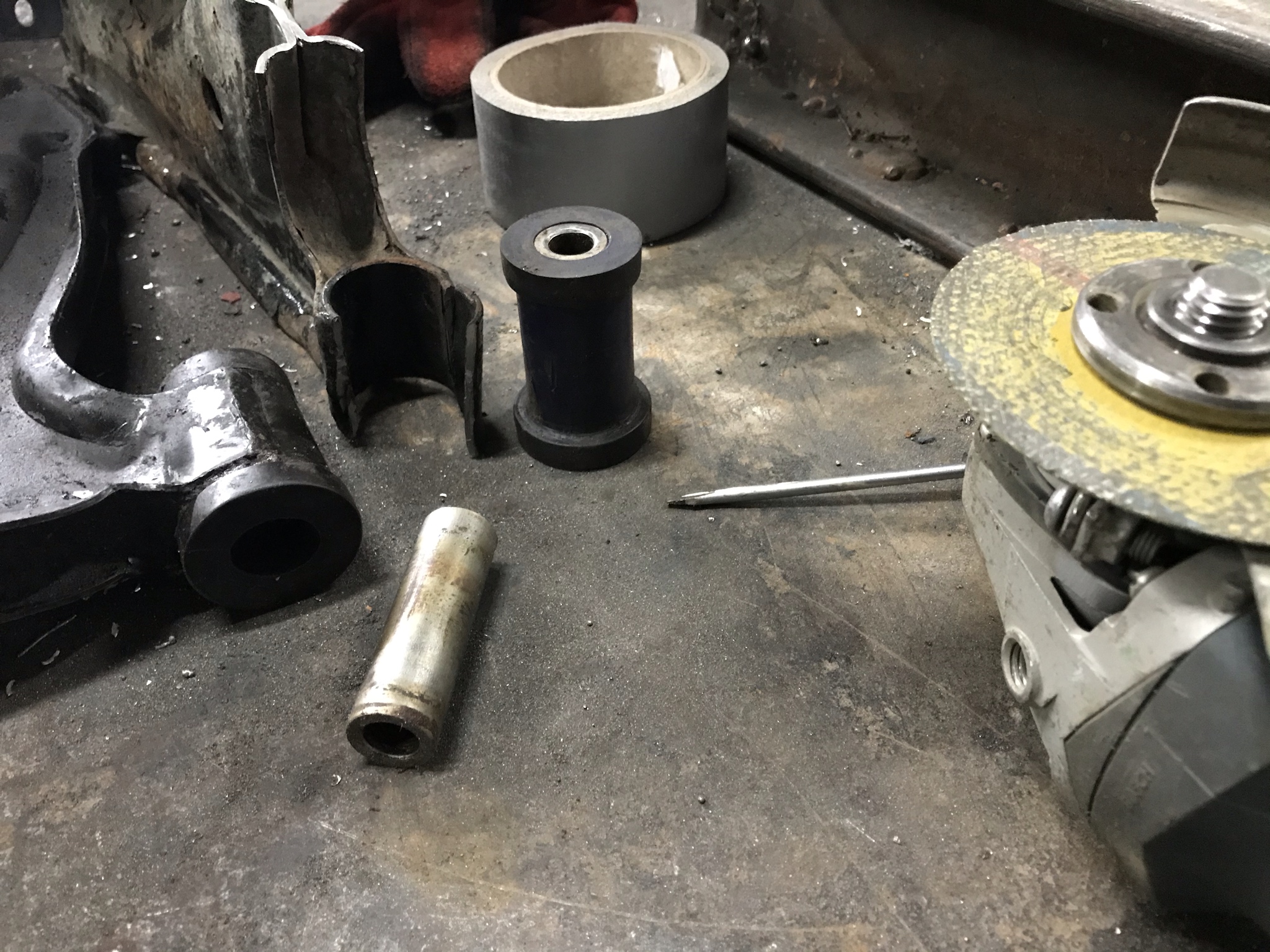 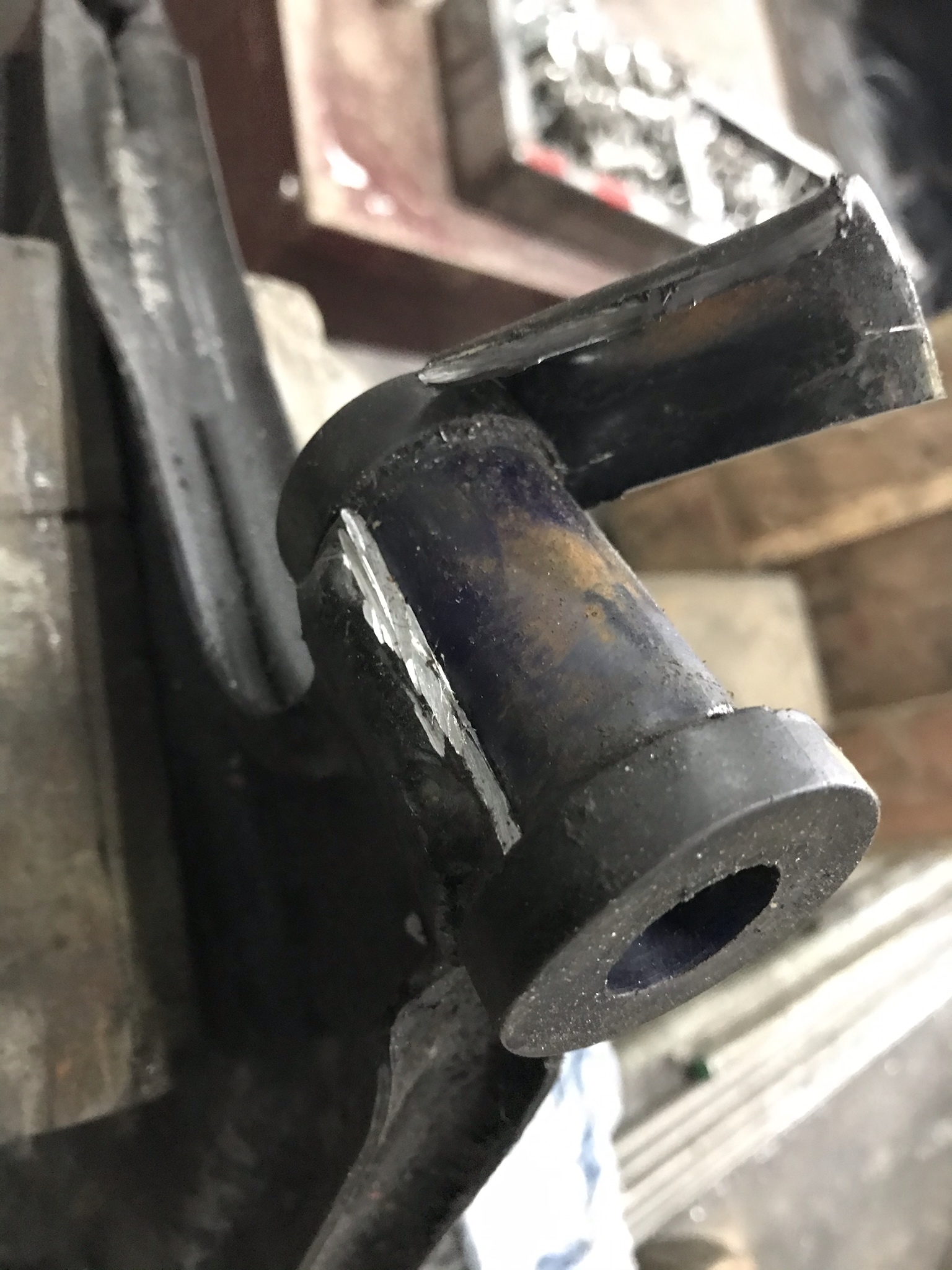 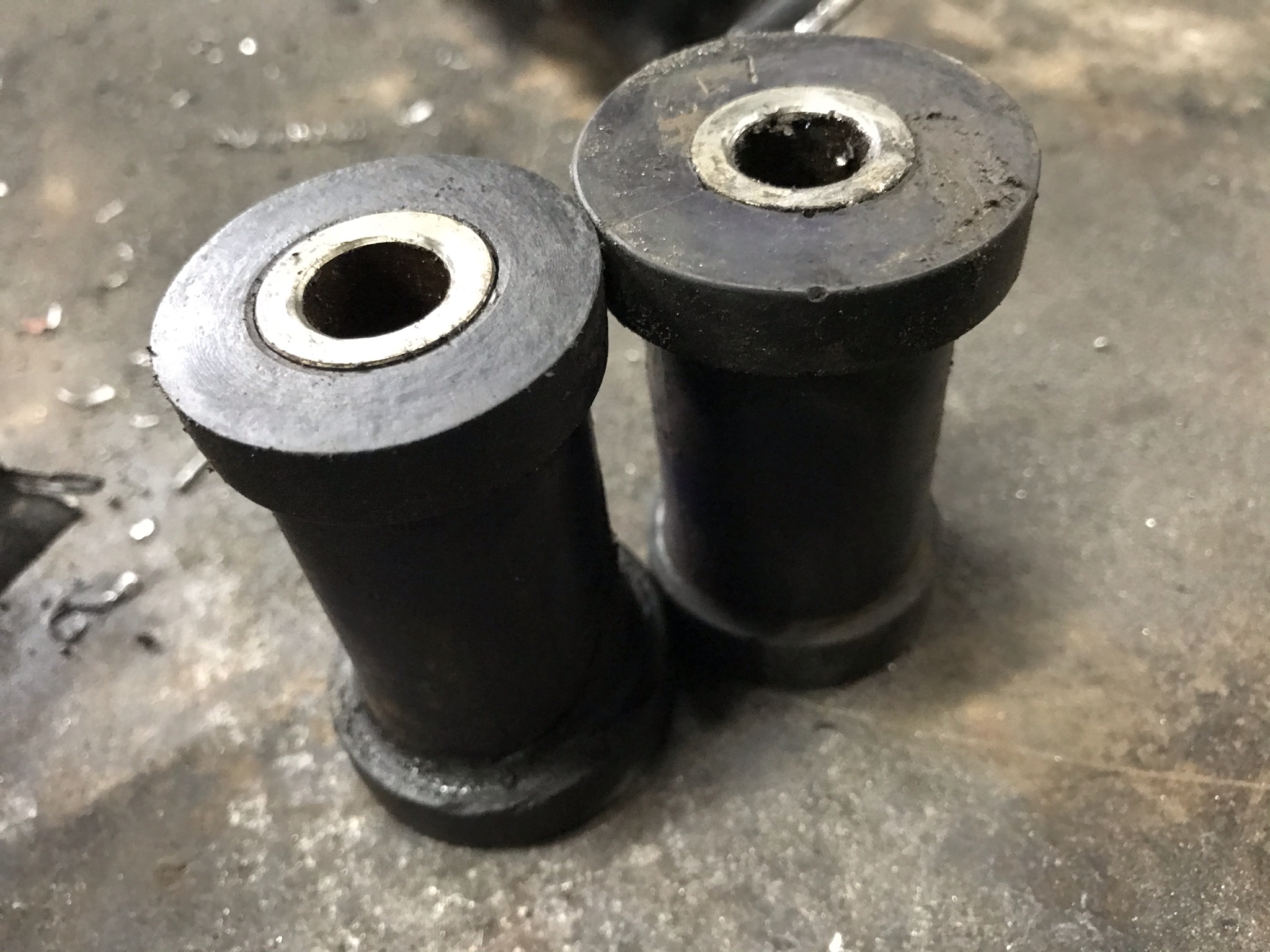 Finally here's a pic of the rear brace I added last week. Car is very solid in the boot area! 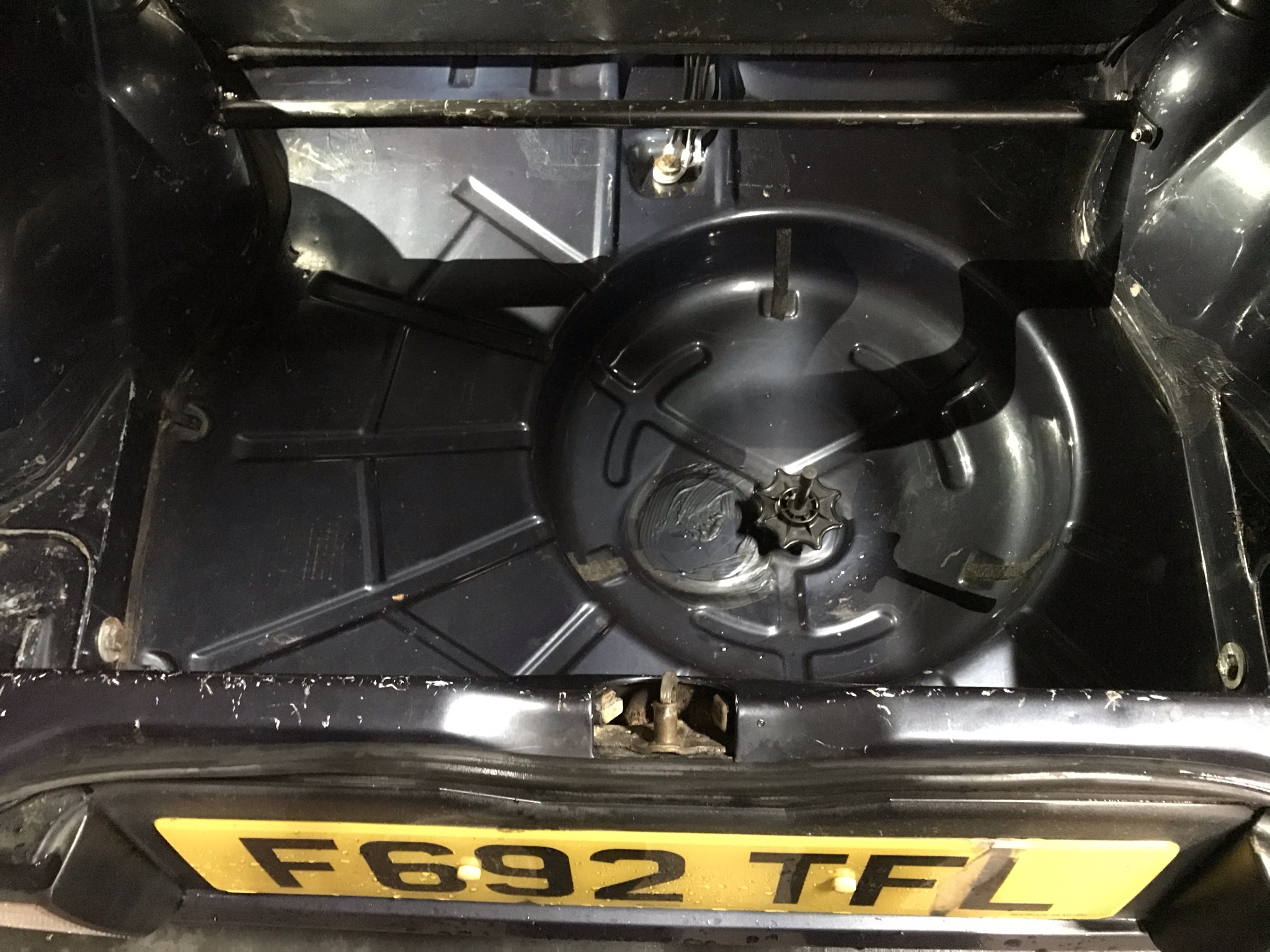 I've somehow managed to lose reverse gear now, must have knocked the linkage somewhere. The stick feels light and not very engagey now, anyone got any ideas? I'm not familiar with the system yet.